Anoxia, hypoxemia-hypoxia or low blood oxygen a condition characterized by insufficient oxygen level in blood to the cells and tissues, or a region of the body is deprived of adequate oxygen supply at tissue level. In silent hypoxia oxygen level of an individual in blood cells and tissue can drop without any warning or even patients who do not experience shortness of breath or coughing until oxygen levels had plummeted to such a degree that the patients risked acute respiratory distress (ARDS) and organ failure. It can result from a failure at any stage in the delivery of oxygen to cells.
The human body requires and regulates a very precise and specific balance of oxygen in the blood. Normal blood oxygen levels in humans are considered 95-100 percent. If the level is below 90 percent, it is considered low resulting in hypoxemia means that the oxygen level in blood has fallen below the normal.
One may experience the following symptoms:

TriOrigin a power tool with modality micro acupuncture, colors that assist to increase ability to act more acceptable in quality, as the modalities from simplest to complex ones are self-sufficient for coping with such problems and obtaining a stable remission. Its 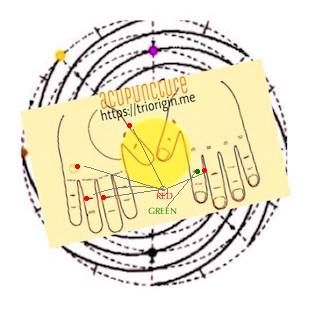 energy concept focuses in miniature form of hands with the aim to increase blood flow. As ENERGY may go up-to any extent, and at any level, because of this possible to give sprouting results irrespective of level of disease. The dominant controlling root meridian is kidney that works in effective way even lungs can be tackled! To ease in syndrome, advisable to put color dots with the only color mentioned and may put white or black pepper seed with non-allergic micro tape.
Think. BELIEVE be of the opinion!