Breathlessness (also known as dyspnoea) refers difficulty breathing or sensation of shortness of breath, or degree of distress involved on activities of daily living. Breathlessness may occur in conjunction with other symptoms such as cough, chest pain, or tightness, and feeling of not enough oxygen along with fever too.
It can be caused by a variety of conditions affecting the lungs, heart and or general circulation. In these cases, breathlessness occurs due to a fall in levels of oxygen in blood, increased levels of carbon dioxide or just difficulty expanding lungs. It is often seen in emphysema, chronic airflow limitation, pneumonia (infection of lungs), asthma, heart failure, dementia, multiple sclerosis and AIDS. The larger number cancer patients also experience some degree of shortness of breath, even if primary cancer did not arise in lung, which normally worse on exertion or exercise. Breathlessness caused by diseases of the heart may become worse when you lie down.
In general, there are four main mechanisms that can make someone feel short of breath:

Causes: Though many possible causes for breathlessness and several different systems may be involved (not necessarily only lungs) making diagnosis somewhat difficult. However, the pattern of breathlessness and other symptoms can give clues to the likely cause. Some possible causes of breathlessness set out below:
Respiratory Causes:
Airway obstruction~ Obstruction of air passages in nose, mouth or throat can cause breathing difficulties. A characteristic example of obstructive lung disease is asthma. In this condition bronchi (large airways) narrow and clogged with lots of mucous. Other obstructive airway diseases include chronic obstructive pulmonary disease (COPD), emphysema, bronchiectasis and acute or chronic infection (bronchitis.
Lung tissue~ Damaged or reduced amount of functioning lung tissue; Lung tumors, infection (pneumonia) or fluid in lungs (pulmonary edema) can affect ability of airways to fill and transfer oxygen into blood stream. Restrictive lung diseases caused by fibrosis (e.g. radiation damage) also limit the ability of lungs to expand and exchange gases with blood.
Impaired ventilator movement~ Pain in chest, abnormalities in abdomen (that compress on lungs), deformities of chest wall (such as kyphosis) and weakness of respiratory muscles (caused by diseases such as multiple sclerosis) may all turn down the amount the lungs expand.
Pulmonary circulation~ Clots in lungs called pulmonary emboli (PE) cause a sudden onset of shortness of breath because blood is unable to reach the airspaces to pick up the oxygen needed by body. Pulmonary embolism classically presents with an acute onset of shortness of breath. Other symptoms include pleurisy chest pain, cough, haemoptysis and fever. Risk factor includes deep vein thrombosis, recent surgery, cancer and previous thromboembolism
Cardiac causes~ Heart failure, mitral valve disease, cardiomyopathy, pericarditis and many other cardiac problems often cause shortness of breath. This occurs, as heart is unable to pump enough blood to supply enough oxygen to rest of the body. In addition, heart problems can cause pooling of blood and fluid in lungs (pulmonary edema) which further limits gas exchange in lungs. Heart diseases usually first cause shortness of breath during exertion but later they develop characteristic types of breathlessness called orthopnoea (breathlessness whilst lying flat so you may find it more comfortable sleeping on several pillows) and paroxysmal nocturnal dyspnoea (PND; breathlessness that wakes you up from sleep).
Neoplastic or cancer~ Lung cancers often lead to breathlessness in later stages of disease. It occurs often as cancer invades or obstructs airways, causes lobar collapse or produces malignant pleural effusion (fluid around lung that prevents it from expanding). Lung cancer can also cause a condition called lymphangitis, which is thickening of lymphatic in lung. It may cause other symptoms such as chest pain or haemoptysis (coughing up blood) and is often associated with smoking. Cancers in other parts of body can also cause shortness of breath from cachexia, anemia or metastasis (spread) to the lung.
Anemia~ associated with a reduced amount of red blood cells in the bloodstream. These are primary cells involved in transporting oxygen from lungs to body. They do this by binding oxygen to a special protein called hemoglobin. Without enough blood cells, tissues do not receive adequate oxygen and the heart compensates by trying to pump more blood. This eventually can cause permanent cardiac damage and worsening of angina and congestive heart failure both of which may lead to dyspnoea.
Other causes:
Sometimes emotional distress or anxiety (nervousness) can cause you to breathe faster (hyperventilation) and make you feel short of breath, and neurological, musculoskeletal, endocrine, hematologic and psychiatric may also be the cause. This can create a vicious cycle as you can become more worried because you feel breathless which leads to more difficulty breathing. Obesity, hyperthyroidism and other metabolic problems can also cause you to become breathless. Fatigue is another possible cause because the level of effort required to breathe cannot be sustained. Therefore, a large number of conditions causing breathlessness that do not arise in lungs. In case of breathlessness, it is first important to rule out all the serious causes such as acute asthma, pulmonary embolus, pneumothorax, hemothorax, acute pulmonary edema and pneumonia, before considering some of the other causes.
Signs: Shortness of breath can manifest as a variety of signs and symptoms, due to large number of possible causes. However, most common frequent presentation is breathlessness and cough. Other common symptoms include cyanosis (blue discoloration often of fingers, toes or mouth due to an increase in the concentration of deoxygenated hemoglobin), chest pain, haemoptysis (coughing up blood), and abnormal sputum and altered breathing patterns. If you have a fever associated with your breathlessness you may have an infection of the lungs (pneumonia). All problems with breathing whether of sudden onset or long-term and regardless of other symptoms should be considered seriously. Although many of the possible causes are harmless and easily treated, you should still see your doctor for a thorough medical evaluation.
Self-care by breathing exercises such as slow, deep breathing, all the way to the abdomen. Relaxation methods too assist. If you experience episodes of breathlessness make sure you sit upright in a supportive chair, try to breathe slowly and deeply and administer oxygen and opioids as prescribed by the physician. If shortness of breath does not resolve make sure you seek medical attention.

TriOrigin acupuncture operates on a precise and well-organized hierarchical system~ the Tri spatial or time diagnosis. The exclusiveness of the Tri Chronopuncture is in the 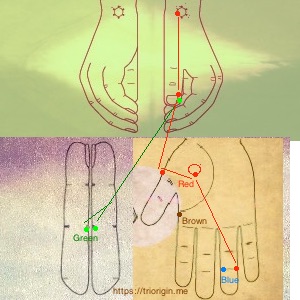 possibility of treating the present disease of patient along with roots of disease in the past as well as its prevention in the future. In addition one can put color marking on the prescribed points to assist in the syndromes.
As the process is only on the hands reflect in miniature form of body through the energy channels in compact system. Indirectly concept is exceptionally safe, as no direct application on organs. Aim is to promote health and ease sufferings. No medicine is ever recommended in any form in the form of chemical composition and at the same time not advisable to avoid your medicine prescribed by your physician.
Give a Try!

Dr Dinesh kapur ~ Consultant, Author
• SMILE; an essence of life, that creates perfection!
• Emotions ‘Lifestyle’ and Effects on Health
Dr Dinesh Kapur lives in the highest integrity and contributes to the wellbeing of others by being an example of benevolence. Besides being a practicing healer, consultant, blogger and author in natural concepts on different specialized concepts of crystals, shiatsu, chiropractic, colors and more specific different modalities such as micro acupuncture, color acupuncture, emotional energy flow, seeds, colors, spiral, mudra, chakra and the SMILE invisible M-Particles fundamental concept.
The whole process focuses only on the miniature form of body through energy channels in a compact system on hands, fingers only. The energy channels of meridian system influence every cell in the body and pass through every organ and its organic system. As the energy may go up to any extent, that may be the reason, it penetrates at core levels!
There is no direct application of any concept on any organs, irrespective of disease, but only in affected meridian channels. So the question of any side effect does not arise; at the most, if energy process does not work, it gives no results. Indirectly, the concept is exceptionally safe as there is no intake in any form of chemical composition called medicine.
The concept a powerful tool to accord exceptional positive effective results through ENERGY channel from normal cold to chronic disease like kidney failure, spinal vertebral problem or problems related to blood or even cells rejuvenation or woman’s issue and more…. Even effective in case of emotional, psychological disorders, or problem related to weight, or pain management. The treatment is effective at all levels ~ •BODY •PSYCHOLOGY •NEURO or Emotional. Effectiveness is not only restricted to treatment concept of common illnesses, which “chase” us in our daily round but also with cases difficult to cure even by the western medicine. The system is an efficient method to restore and support one’s health and to prevent disease.
The beauty of concept to caters the needs of an individual’s! Though, lifestyle too matters a lot in your OWN health! AIM is to promote health and ease sufferings with SMILE. When you smile, it’s an attempt to bring perfection the emotions, and with that perfection comes to the faculties of life!
smile!