Anuria means cessation of urine output less than 50 milliliters a day, sometimes called anuresia, is no passage of urine. Anuria may result from severe disease of or inadequate blood flow through kidneys, or a complete blockage of urine flow by anything such as stones or tumors that blocks both ureters or the bladder outlet, or obstructs the urethra by enlargement of prostate gland. It may also occur with end stage renal disease. It’s often caused by failure in function of kidneys.
Anuria is an emergency needing, urgent investigation so that it’s cause can be discovered and corrected, if possible. Otherwise renal DIALYSIS [artificial filtering of waste products and water from the blood] must be used to prevent death from accumulation of waste products.
Causes and Symptoms:

In TriOrigin energy concept, it means excess Yang Coldness condition but gradually approaching towards the Darkness condition, as non-production of urine! One may get the positive results even from the initial few sessions of acupuncture on miniature form of hands as energy may penetrate even at core levels. 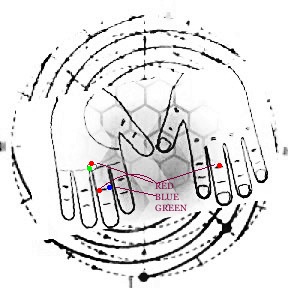 It involves inserting of very fine micro needles into specific ‘energy pathways’ located in miniature form of hands and feet’s that too 1mm just to prick on certain energy pathways to unblock the natural flow of light energy (qi or chi). It is observed that blocked qi is thought to cause disease, and unblocking the qi flow allows the body to heal of its own.
It seems unbelievable but true in an effective way that too without any medications. One who is affected must give a thought. Think, believe and act! Meanwhile, may put color dot as prescribed to support in syndrome!